We have appointed our first-ever Environment Correspondent in Ireland to work across our ten Irish news brands covering one of the biggest global issues facing our generation, underlining our commitment to fearless and important journalism.

Experienced reporter Shauna Corr, who has worked as a reporter with Belfast Live and the Daily Mirror Northern Ireland for the last five years and where her passion for the environment has shone through, will take on the brand new role.

Her column, The Earth’s Corr, which launched in the Daily Mirror earlier this year, has sought to bring environmental issues to a wider audience and hold government and big corporations to account.

In her new role, Shauna will work across all of Reach’s print and digital titles in NI and ROI, including the Irish Daily Mirror and Irish Daily Star.

Editor-in-chief for Ireland, Chris Sherrard, said that the new role will be vital in the years ahead.

He added: “Alarmed by what’s happening to the world, Environment Correspondent is a role that I’ve been keen to create for some time and there’s no one that fits the bill for that role better than Shauna.

“It is one of the most important issues we face as a society, throughout Ireland, and we’re keen to now really bring it to the fore and make what’s happening accessible to our readers so they feel informed and can play their part in creating a better future.

“Shauna is a tenacious and talented reporter whose passion for the environment and hard-hitting journalism is clear to anyone who knows her. She will thrive in this role and I’ve no doubt that we can help to make a real difference.”

Shauna said: “I am honoured to be taking on this first of a kind role for our publications across Ireland, north and south, and will do everything in my power to shine a light on arguably the biggest threat facing our generation.

“Our governments and politicians can no longer believe half-baked measures to reduce our greenhouse gases and other pollution is enough. The climate crisis is here and it will impact each and every one of us. We need urgent and drastic action now.

“My aim in my role will be to uncover and report on the stories that matter and to highlight where our policies fall short. While some of the impacts of the climate crisis are here to stay, it is not too late to stave off the worst of what has been predicted.

“We believe there's still hope and through this role plan to make a difference for us all.”

And read her weekly column in the NI Daily Mirror every Saturday. 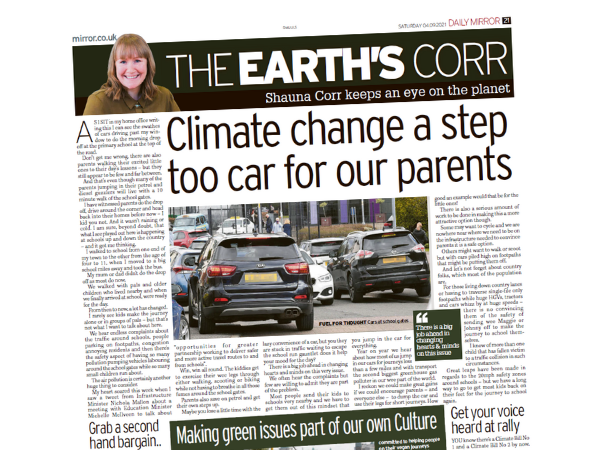