On January 22, Belfast Live and 37 other websites plus 25 print titles right across Reach's UK network joined forces to launch a campaign to help combat climate change. This is the first time our UK-wide network of trusted digital & print brands will work together for a common cause that will resonate with millions of readers.

A new section was revealed on the website to highlight some of the key issues facing Northern Ireland and some of the people in our communities making a difference.

And the Lord Mayor of Belfast is among those backing our campaign to encourage readers to #Do1Thing in the fight against climate change.

First Citizen Daniel Baker said: “We all have a part to play. There is no Planet B. Let’s do this together.”

Climate change affects all of us and the campaign has been rolled out across Reach plc’s regional titles in the UK, bringing a simple but vital message to a huge audience. The #Do1Thing hub features the inspiring stories of local people and opinion pieces from activists passionate about change.

New Stormont ministers have also lent their voice to the campaign.

Infrastructure Minister Nichola Mallon wrote: “I have a responsibility to this generation of young people and the next generation who will live with the consequences of the climate crisis.”

In his piece, Environment Minister Edwin Poots told Belfast Live readers: "I recognise that to tackle the climate change issue, we need a whole system approach.

"I will be asking for support from my Executive colleagues, the agri-food and farming sector, across big industries and from all of us, as citizens and the guardians of our green lands."

As well as a day of major activity [on launch day, January 22], Belfast Live has committed to regular content focussing on the environment that will be housed in the #Do1Thing hub.

“The #Do1Thing campaign is something that we can all get behind. It is vital that we all make changes to our daily lives to help tackle the climate crisis. Many within our communities are already ahead of the curve when it comes to the environment and our #Do1Thing campaign brings some of those stories to the fore. It is also imperative that with Stormont back up and running our politicians lead on the issue and push forward progressive policies that will make a real difference.” 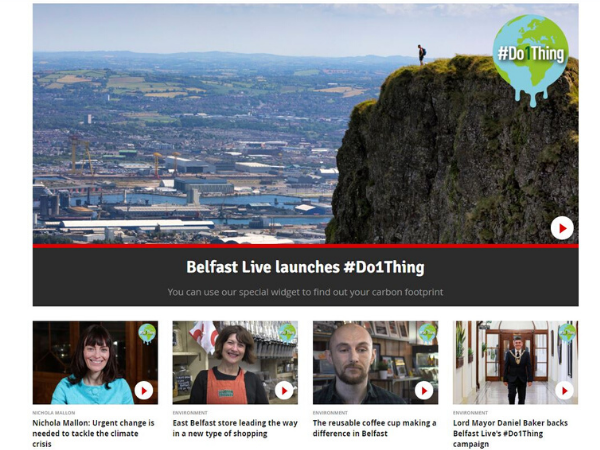 Any brands looking to be involved in the climate change conversation and would have your brand associated with our campaign, sponsorship opportunities are available. Get in touch at create@reachplc.com.