Mike Sheridan: “A good publication shouldn’t necessarily be one that aligns with your world view.”

The editor of our relaunched Buzz website on what he enjoys most about his job, doing a 130-mile ultramarathon, the best story he’s come across in journalism and how he never leaves the house without a purpose.

Initially I wanted to be a vet. And then an FBI agent (blame The X-Files). In my teenage years I just wanted to make stuff - documentaries, movies etc.

Probably LinkedIn - which is clearly showing my age.

Bob Woodward is a legend and brilliant writer and reporter. Meghan Daum has a way of articulating a point stuffed with nuance brilliantly also.

What do you enjoy most about your job?

The creative aspect for sure. Building a project, written feature or video series from the ground up and watching it come together.

Video camera this year and a Rower and Echo Bike I use to train on my lunch breaks and before work.

I’d say exercise, but I don’t fully enjoy it until it’s over If I’m being honest.

I did a 130-mile ultramarathon with a pal and we raised €45k for charity. Other than that, self-funding and having two documentaries broadcast on national TV stations.

There’s more noise than ever right now and you generally won’t find balanced views (or many facts) on social media.

Who would your fantasy dinner guest be and why?

Jon Stewart or Bill Burr. Stewart has a way of making really serious and dense points in an informative and entertaining way - I’d probably just take notes. Burr because he may very well be the funniest human on the planet.

What are you currently watching on Netflix?

A photographic memory?! Not quite a superpower but I’d take it.

The ‘80s in the US somewhere. Purely for it being OK to like really cheesy music.

Best story you’ve come across in journalism (yours or someone else’s)?

This is where the photographic memory would come in handy…most recent one I can think of is doing a long zoom interview with John Brennan (the former Director of the CIA) and him having to sit there for a solid five minutes as I desperately attempted to figure out how to pin the video on his side. He was extremely patient. I would’ve probably closed the laptop after two minutes. He told me (off-camera) that Joe Biden would regularly call his father when he was sick (and Biden was VP) to chat about Ireland - his Dad was from Roscommon.

Interview some of the greats, or at least people I greatly admire and haven’t had an opportunity to yet. Jon Stewart, Barack Obama, David Fincher, Angela Merkel.

What is your favourite meal?

Chicken curry with boiled rice and no onions. There was a takeaway called China Link in Swords that did the best one I’ve ever tasted. It sadly no longer exists and I’ve been chasing that curry sauce high ever since.

What would you never leave the house without?

To the audience: You should make Buzz a part of your day because...

I think a really good publication shouldn’t necessarily be one that aligns with your world view. It should inform of course, but it should also challenge and educate and even amuse! Fairly lofty goals, I know, but that’s what we’re striving to do at Buzz and I wake up every day with that in mind. 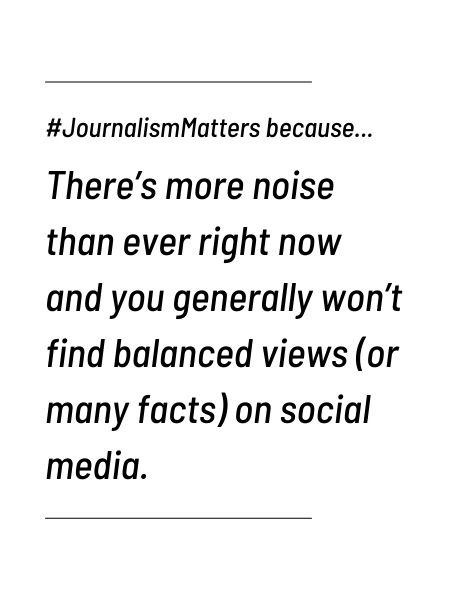