Zoe Watson: “My parents signed me up for a BTEC in Media Studies & that's led to where I am today.”

Our newly promoted Group Picture Editor on bringing back Bebo, getting starstruck very easily and the people who inspire her the most.

Oh definitely invisibility. I could have so much fun with that, I'd spend my day pranking people.

Throughout my early teens I wanted to be a long distance lorry driver. I suppose I saw it as a way of getting paid to travel and the fact I'm only 5' 1" made it more of a challenge. At that age, I never cared much about school or academia, I just wanted to leave after GCSEs, work full time in SuperValu and at 18 get my HGV license. My parents on the other hand insisted I stay at school and signed me up for a BTEC in Media Studies and that has led to where I am today.

I'm old school - Facebook, although, I've been very excited by the thought of the return of Bebo. I'd love to be able to access my old account.

Currently reading or listening to (podcast)?

I'm listening to ‘The Bomb’ from BBC World Service. It's about the atomic bomb dropped on Hiroshima during WW2 and how it's creator, Leo Szilard tried to prevent it.

I love my films so I have a few. The original Blade Runner, The Shining, One Flew Over the Cuckoo's Nest and Rosemary's Baby would be my top four. Also, any of the Cornetto Trilogy with a cheeky pizza and bottle of beer.

Oh there are too many to mention, I get starstruck very easily. I once made a fool of myself as I stumbled over the word "hi" (I know, not the most taxing of words) when Eddie Irvine showed up at my son's birthday. It was Christmas and Eddie was back in Northern Ireland for a few weeks and was checking in on his karting place in Bangor where the boys were having their party. He was good enough to jump in a pic with them. He probably thought if he agreed, I would go away.

Who or what inspires you the most?

I'm always amazed by the strength people have when dealing with serious illness or disability. I think I would struggle not to be inspired by racing driver Billy Monger who lost both legs at just 17 in a high speed crash when he was competing in F4. His courage and determination to not only walk again but race is astonishing.

If I wasn’t Group Picture Editor, I would be…

Probably sitting at Larne Port in the cab of my lorry cursing Brexit.

I keep telling my son to live his life, do and achieve everything he wants to before settling down with a family, when a simple trip to the park requires a full day of planning.

'This working from home lark isn't bad when you've a son who surprises you with a @BunsenTweets burger, chips and milkshake.'

1985, Wembley Stadium, Live Aid. One of my biggest regrets is to never have seen Queen perform live.

I've been pretty lucky with jobs and honestly enjoyed all of them. The strangest job I had was evening and weekend shifts in JJB Sports in the mid-90s. It was my job to check every pocket, hood and trainer for incendiary devices at the end of the evening as shops were being firebombed on a regular basis. Imagine asking a teenager to do that now, the health and safety officer would be having kittens.

Most overused word or phrase?

"It's just saving in"

Describe your 2020 using emoji only:

To the audience: Enjoy life, you don't know what's around the corner. 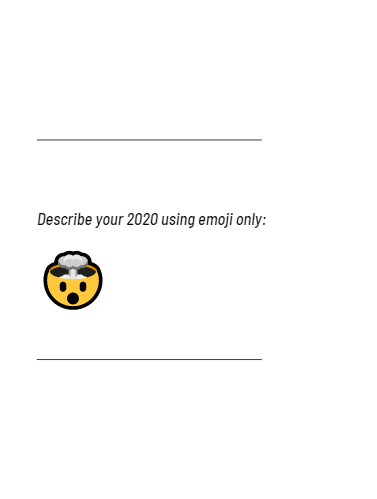