Stephen McMullin: ‘If I wasn’t Head of Branded Content I’d probably be writing something somewhere.’

Our Head of Branded Content/whiskey nerd on his favourites of 2020, how the best mix to help him switch off from work is music, reading, whiskey and fighting with the kids (this made us laugh!) and his most overused word or phrase.

Let’s break the ice with a drink, what are you having?

I’m a bit of a whiskey nerd, so that’s a dangerous question. The last bottle I picked up was a Bowmore 15, so may have a wee nip of that. Tastes like sophistication.

Although, in a social setting I’d probably go for a Guinness.

Where do you want to travel to next?

Honestly, not much of a traveller - I miss my home comforts too much. However, I went to Norway a couple of years ago and would love to go back. The air, the scenery…it’s stunning. Just don’t eat the caviar from a tube.

What would you never leave the house without?

I’ve had a lot of crappy jobs over the years, including production line in a salmon farm, painter-decorator (actually quite enjoyed this), selling baby-clothes...

But hands down the worst gig I ever had was working in a market research call centre. It paid my way through college, but to this day I have a slight phobia of telephones (as anyone who’s ever tried to call me on the office landline will confirm).

If I wasn’t Head of Branded Content at Reach, I would be…

Unemployed..? Probably writing something for someone somewhere, ideally having little or nothing to do with social media.

I studied coding for a while and was looking to work in tech before this opportunity came up, so maybe some mad start-up.

Most overused word or phrase?

Dinner. I often forget to have breakfast, so it sort of rolls into lunch. Which reminds me, I’m starving...

Actually, a few days before the first lockdown I was at the launch of Redbreast 27 Year Old, which would have been great anyway, but the fact that it turned out to be my last proper night out for ages made it extra special. The whiskey is a stunner too.

The one good thing to come out of lockdown for me has been virtual tastings, which have allowed me to learn about and taste a lot of whiskeys I would never otherwise have encountered - all from the comfort of my own home. It’s not a drinking problem, it’s a hobby.

The only other thing released in 2020 that I recall enjoying was 'The Devil and the Dark Water' by Stuart Turton. An excellent murder mystery set on a boat.

How do you switch off from work?

I’ve been meaning to rewatch 'Die Hard 3' now that it’s on Disney+, so maybe that. I can only seem to watch movies from the late-80s/early-90s these days. There's something comforting about them, which is either a pandemic coping mechanism or a sign of age. Or both.

The best piece of advice you’ve been given?

It’s a toss-up between “Don’t eat the yellow snow” and “This too shall pass”.

Ah, a time travel question…it depends on the parameters. If it’s going back along my own timeline, 2012 to tell myself to scoop up a few dozen bitcoin, otherwise maybe the late-1960s to catch a few gigs - Jimi Hendrix, Miles Davis…possibly a few others.

I’d be interested to see Ancient Egypt or Victorian London, but wouldn’t want to stay for long. Pretty sure this is the best time to be alive, lockdowns, etc. notwithstanding.

I would like it to be some kind of magic like Doctor Strange, in reality it would probably be the ability to kill houseplants just by looking at them. Although I already have a bit of that. 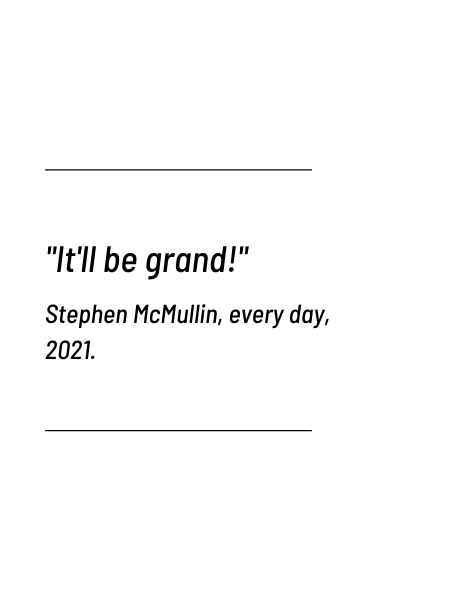