Ryan Smith: 'I don’t think I’ll ever forget the excitement of getting my first journalism job.'

The Belfast Live editor on always wanting to be a writer, his guiltiest pleasure that he doesn’t feel guilty about, and how that pint at Borough Market in London last summer after lockdown was his fave memory of the year that was 2020.

The boss is buying you a drink, what are you having?

I’ve fairly simple tastes so a pint of Carlsberg. If I haven’t been sent home by 11pm, a Jameson and Ginger would be nice if he doesn’t mind splashing out.

A writer...and then a journalist from the moment I stepped into the Fermanagh Herald office at 16.

Despite its many faults, some of the things we’re able to do with Facebook as a media organisation are incredible - even new things in the last few months. Outside of work, WhatsApp would be my most used.

It’s very hard to split them between Maurice Fitzmaurice and F. Scott Fitzgerald.

Nothing at the moment - I like to pretend I read more than I do to seem smart but unfortunately I’m averaging three or four books a year these days.

Who is your celebrity crush?

Bob Dylan, Bruce Springsteen, Bono - it’s a long list. Although hopefully it’d be the start of a lifelong friendship.

I don’t think I’ll ever forget the excitement of getting my first journalism job at the Fermanagh Herald in 2012. But obviously getting the opportunity to take on the role of Editor of Belfast Live in September has been very special.

Would love to say I’m a great singer but fear, in reality, I am not.

What is your guiltiest pleasure?

I’m well aware people hate U2 and Bono - but I love them and don’t feel guilty in the slightest!

It’s a cliché but you get what you put in. I’m lucky to work with a lot of people who understand that inherently.

In this job, invisibility would be good - I’d only use it for good though.

To Greenwich Village in New York in the 1960s for the folk scene. Or 1920s Paris so I could go drinking with all the famous writers who lived there and tell them about the book I was never actually going to write.

I’ve only been a shop assistant when at school and a journalist - so no complaints here in case any old bosses are reading!

I’ve never been to New York so that’s up there. But I love travelling, so anywhere would do me as soon as this is all over.

To the audience: You should make Belfast Live a part of your day because… We care, we understand what matters to our readers, we don’t have any political bias...and we’re a bit of craic too. 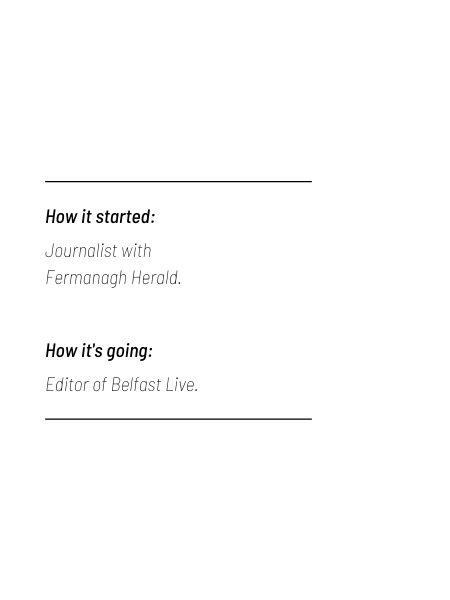