Derek Foley: "It's hard to explain just how good some of my Star colleagues are."

The Irish Daily Star Reporter on what makes him laugh the most, his biggest fear and how he's currently directing a film version of Shakespeare’s Measure for Measure.

What did you want to be growing up?

As good as the genius who was writing Man Bites Dog in the paper my dad brought home every day from work.

The 1940/50 collected Philip Marlowe radio shows with Gerald Mohr as Marlowe. I thought nobody could beat Bogart’s timing and delivery of Marlowe lines ­— I was mistaken.

PS: Mohr is not on the first 10 or so as they had Sterling Hayden first...

What is your biggest fear?

That people will forget who Shakespeare, Damon Runyon and Echo & The Bunnymen were.

What makes you laugh the most?

The way we now accept the experts in mental health are pop stars, sports people, influencers and others in search of an opening, any opportunity to...

Or that for some inexplicable reason I started building a glider just after lockdown and have continued building, assembling and painting it ever since. I mentioned this to a friend the other day and they nearly had a coronary laughing...yeah, I realise the symbolism now.

What are you up to away from The Star?

I’m directing a film version of Shakespeare’s Measure for Measure (details on IMdB). It will be coming to somewhere near you soon as there is a publicity on Wednesday, Sept 29.

Favourite place to go on holiday in Ireland?

Bruxelles — just off Grafton Street. Eventually I’ll either meet or at least see everyone in Ireland pass by.

What would you sing at Karaoke night?

Reconnez Cherie by Wreckless Eric. I was once asked by The Proclaimers to contribute this song to an album they were making. In my rush to fabricate still having a band I brought my friend Paul Howard (of Ross O’Carroll Kelly fame) along to the Olympia to meet with them. The Reid brothers are very sensitive and they didn’t like it when Paul called Craig ‘Charlie’ or vice versa. They stormed off and I never heard from them again.

To the audience: You should make the Irish Daily Star part of your day because:

It is hard to explain just how good some of my Star colleagues are (and I’m sorry I can’t mention you individually).

I’d go as far as to say our brilliant reporters — between us — have met nearly every reader; we have to because we are, for our part, their stories. 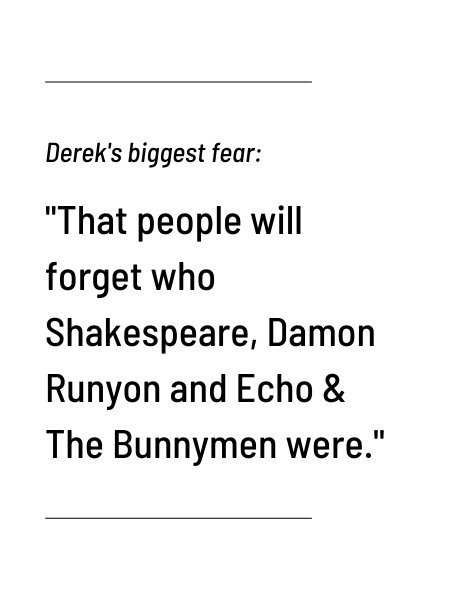